Video mapping, The Odyssey of Hô 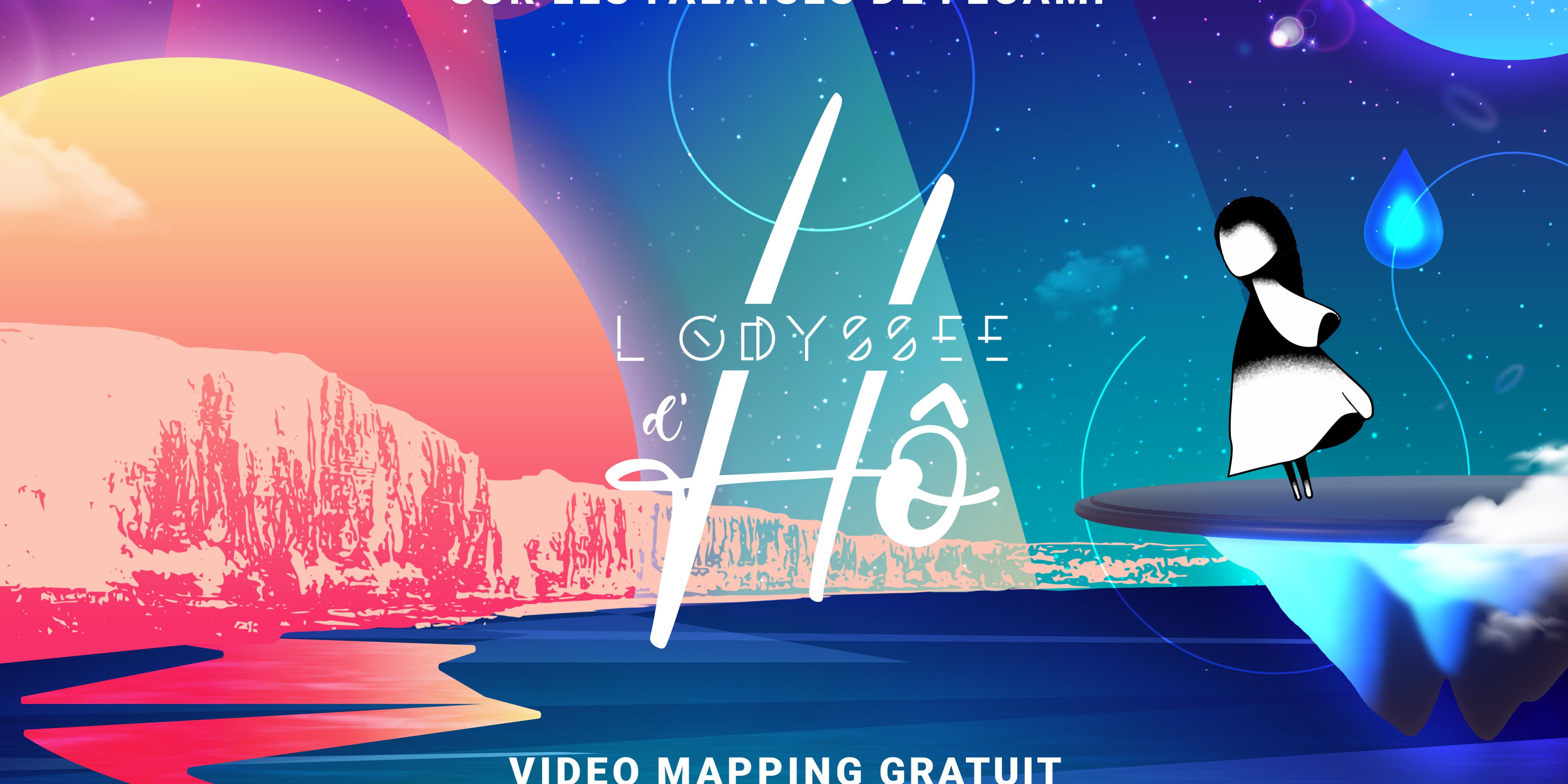 From June 29 to August 27, the famous cliffs of Fécamp will be adorned with a spectacular projection! Visible from the walkway dike of Fécamp, this free show is open to all and will immerse the public in an enchanted and fascinating universe.
Initiated by OLVEA’s Philanthropic Fund, which finances this mapping, the Fécampois scriptwriter Julien Clugery and the company Cookies Production will embark the audience in an entertaining, poetic and artistic experience based on the imaginative world of tales, through the journey of a child: Hô.
She undertakes an interstellar journey across 4 worlds: The Planet of Winds, The Planet of Water, The Planet of Seasons and the Planet Earth. Faithfully supported by a metamorphic “drop” that symbolizes her consciousness, she undertakes a trip strewn with pitfalls against which analysis, imagination and resilience will enable her to overcome the challenges she goes through, with courage and wisdom.
Between philosophical and humanistic tale, this fabulous story invites us to a reflection on life experiences as well as to environmental awareness.
Learn more about the Odyssey of Hô
Press release
Booklet - Story of The Odyssey of Hô

Story of the Odyssey of Hô

Scene 1: The discovery of a drawn child and a drop

A white point stands out and moves in the interstellar void, like an oscilloscope. In the distance, appear planets connected between them by a passage.

Hô, then represented by a simple line drawing, reveals itself beside the white point, become a metamorphic drop. After having established a first visual contact, Hô realizes that the appearance of the drop can be modified: it becomes a boat, then a glider. The child climbs on this glider and finds herself sucked into a vortex that carries them towards the planet of the winds.

​Scene 2 : The planet of the winds
Sitting on her glider, Hô floats in the air, but quickly a huge tornado takes shape. Then, several whirlwinds come to disturb this planet. The elements swirl violently in these unusual winds and Hô must then use her imagination to get out of this climatic bad step.
She draws a rudder on her glider which allows her to cross and avoid the tornadoes without any problem.
But suddenly, the glider takes speed and Hô finds herself again absorbed by a vortex which will lead them towards a new planet.

Scene 3: The planet of water
Hô and her conscience, again metamorphosed from a glider to a drop, fall while spinning at the exit of the vortex. The drop then transforms into a boat and they land on an ocean.

The child starts to sail peacefully but quickly, she sways with the swell, without being able to direct the boat.

Enormous waves are formed and Hô must find a solution to get out of this perilous and abnormal situation. She draws a sail on her boat in order to direct it peacefully.

It is then that appears a huge wave which breaks on the boat. Hô waves her arms to create a bubble around her to protect herself. The child finds herself submerged and dives into the abyss of this planet, discovering magnificent oceanic funds. The drop then metamorphoses into a submarine and Hô explores a world of bright lights and darkness.

Again, a vortex appears and takes them to a new planet.

Scene 4: The planet of seasons

Hô discovers then a cubic planet where 4 of its faces represent a season. It seems to be inert and the inner mechanism, at a standstill, takes shape.

Always accompanied by her conscience, the child observes this lack of movement. The drop then metamorphoses into a mechanical wheel and is placed in the gear. The planet comes to life, trees grow on all four sides but the seasons intermingle. It snows in spring, buds grow on the trees in autumn, the leaves show their beautiful green color in winter and fall in spring. But Hô shows resilience and manages to restore the cycle of the seasons.

Everything seems to be back in order on this beautiful planet, but Ho is being sucked back to its center. She sees a blue dot in the distance, towards which she inexorably falls and loses consciousness.

Scene 5: The planet earth
Hô opens his eyes and sees in the sky a small point drawing the mark of an oscilloscope. The drop has become again this small distant point and Hô finds herself alone on this new planet.

The girl is lying down, dazzled by the sun rays. She puts her hand to protect herself, gently spreads her fingers that she did not have as a child drawn and discovers that she has arrived on the planet Earth.

These multiple experiences crossed with courage as well as the fight against the climatic disturbance shaped and enriched her. Her appearance has changed: Hô has been transformed into a human being.